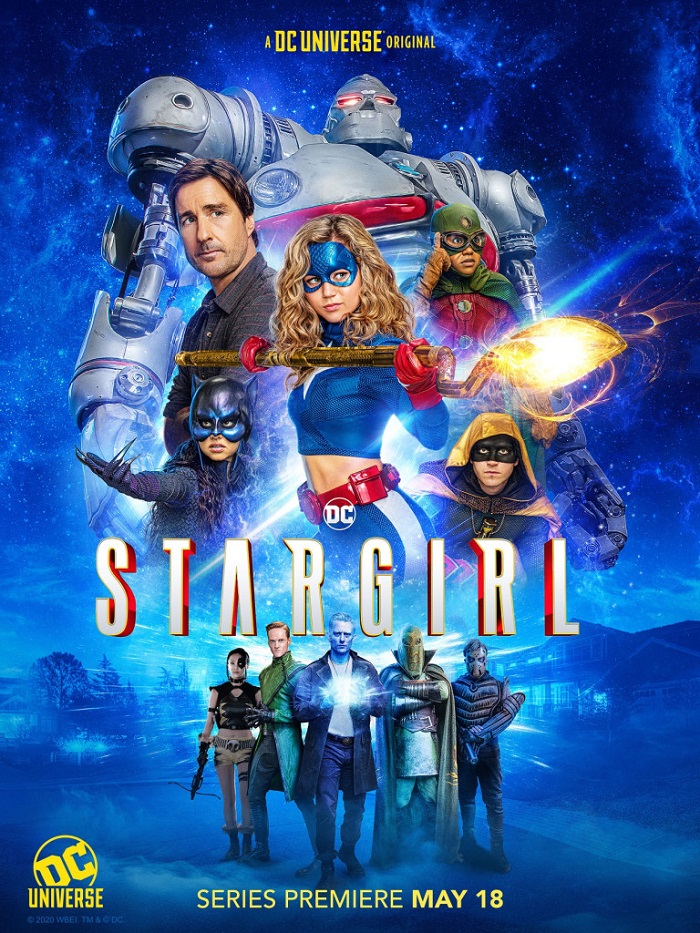 I’m going to keep this short because Lord knows I can go on for hours with these mo-fucking recaps.

The CW is not something I watch on the daily, but as it is flooded with superhero content and has been for some time it seems like I’m a pretty lazy comic book blogger since this is the case. So here comes my first TV show recap. And I’m starting with the wonderful, Star Girl.

Now, did I want to watch this when I saw the trailer? No.

Do I want to keep watching it now that I’ve seen the first episode? Also No.

But will I be watching it in order to keep food on Luke Wilson’s table? Yes.

Speaking of Luke Wilson, he plays Stripsey, the sidekick to Star Man. What’s weird about that is, is that Stripsey was Star Man’s butler and five years his senior. He also has a flying car that blows up.

The beginning of this show is cool. It’s like a fight scene. Explosions. Bad guys VS good guys. There are lasers. Star Man gets stabbed really bad and then he tells Stripsey as he is dying that his staff will eventually go to someone worthy, and that worthy person is definitely not Stripsey. I guess they thought the dying scene between Stripsey and Star Man was funny but it wasn’t? So…Anyways Stripsey is all “You have to go to a hospital, man” and Star Man is all “What fucking superhero do you know goes to the fucking hospital let me die in your car as it blows up, how about that?”

Cut to: A little girl on Christmas Eve sad because her mom is leaving for work. Grow up, bitch. Parents have to work. Sorry you have to be with your rich best friend on Christmas Eve.

This selfish little girl grows up to be Courtney and Courtney’s mom, who is type-casted as a white trash diner waitress in every movie btw,  is dating Stripsey, who just goes by Pat now. Pat has a fat dog and a son who is really annoying and likes video games and science. So I guess he will be the Ron to Courtney’s Kim Possible? Except, like, they won’t make out. Hopefully.

They move to Nebraska for some reason and everyone in Nebraska is really nice to them except Courtney who goes to school and no one likes her. Which is so weird because she is a “regulation hottie” not a fucking nerd. But some old Asian bitch who must be a teacher because there’s no way that old bitch was in high school, decides to relegate Courtney to the table of “loners.”

The jocks come over to the table and try to see nude pictures of one of the hoes at her table. Courtney ends up standing up for  the girl who doesn’t want to show off her hoe pictures. Then the jocks are like “then we’ll take your phone, blondie” and she’s like what the fuck and pushes this dude and she gets in trouble because white men don’t get in trouble. Not in Nebraska anyway.

Later at dinner, the nerd son is like “I made friends.” And then the white trash mom is like “did you make friends, Courtney? It’s Friday. You should probably go hang out with someone. Like seriously, can you leave?”

So Courtney is like “okay, I’ll go to the basement since I have no friends.”

In the basement star man’s staff is there, blah blah blah. She goes to hang out with the sentient staff and they decide to blow up the jock from earlier’s car.

After Courtney blows up the car and beats the jock in the head with the sentient staff, satisfied, she decides to go home.

Stripsey grabs the staff from Courtney and is like “hey, that’s Star Man’s” And when it touches Stripsey it dies. Ooo. That means Courtney is worthy.

Courtney assumes that Star Man must be her dad because the staff works for her, and also because Pat shows her a picture of the JSA and the guy in her locket is the guy in the photo, so she finds her mom and is like, “is my dead dad a superhero?”

Which is a strange thing to ask your parent.

WT mom is like, “No. He showed up five times in your entire five years of living and one of those times was to shove his dick inside of me and forget to pull out. Trust me, if he was a hero, he would know how to pull out.”

UGH IT’S NOT OVER.

The jock who got his car blew tells his daddy, and his daddy is clearly a super villain and I’m not just saying that because he’s a rich, white man. He wears circular wire rim glasses. Yeah. Their conversation goes like this:

“Daddy, a girl beat me up with a glowing stick! WAHH!”

“Tell me more about this glowing stick, who was the person wielding it? Did they perhaps have a star on the front of their shirt?”

“What, um no, it was dark, are you mad I stole and then blew up your car?”

“Hmm, what? Oh, no. It was insured for twice what it was worth, you have made me richer with your stupidity. Goodbye, if you learn anything from this exchange it is that you never have to take responsibility for your actions because anything you do is fine!”

Then the dad goes into his closet and opens it and there inside is the tackiest green, leather dress I have ever seen.

Later at Courtney’s house the staff wakes her up to go play again and luckily she is sleeping in bed fully clothed with the jeans and t-shirt and zip-up hoodie she was wearing earlier. Who sleeps like that?

Anyways, they get on a roof and she does treats the staff like it’s a pair of uneven bars or a pommel horse. Then an unknown entity begins to telekinetic-ally beat the shit out of her. She is thrown into a fence and then into a pile of tires.

The telekinetic guy is the one who wears the ugly green dress. And he tries to read her thoughts, but she slaps him with the staff. Then he starts shucking giant tires at her which she slaps out of the park with the Staff like she’s fucking Aaron Judge.

Then a giant robot comes to save her.

What did you guys think of Star Girl? Did you hate it as much as I did? Will you continue to watch for sad Luke Wilson? Will this show be canceled in the middle of the season, or will they let it go on for it’s full run? All these answers and more will be revealed as 2020 continues to drag on trying to give 2016 a goddamn run for its mother fucking money.