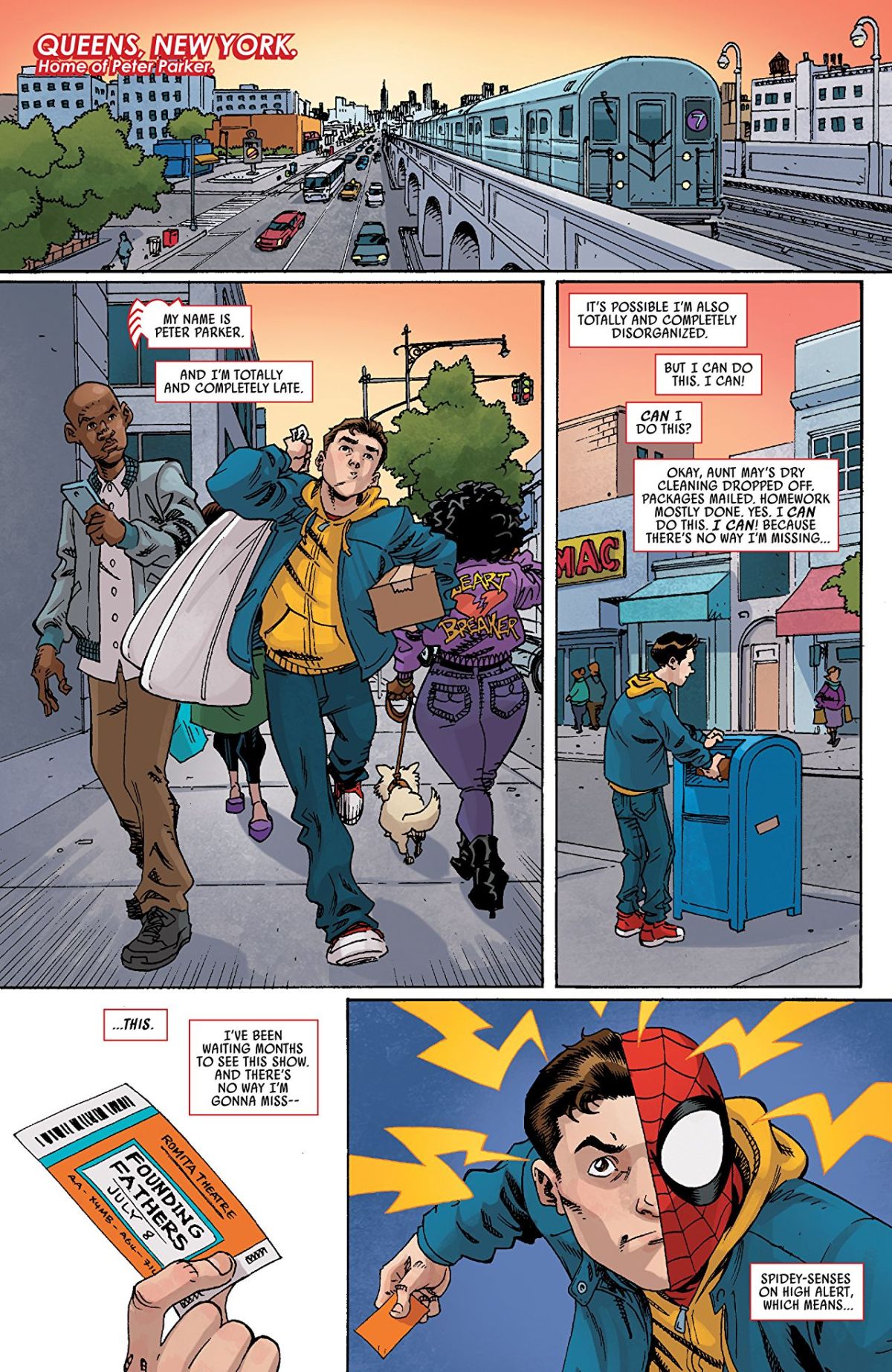 I have no idea what this book is going to be about as a I pick it up, but as I’m still riding that Spider-Man Homecoming high, I just don’t even care at this point, because if it has Spider-Man on it I want to get my hands on it!

The cover is classic Spidey web-slinging through the city with a masked goon behind him and there’s a menacing man in a black mask and a shnazzy hat in the background watching over him… ya know, menacingly. Menace. Menace. Now it just sounds and looks wrong right?

According to the intro, Peter Parker is still in high school, so I’m guessing this comic book is movie influenced. Them writers givin the people what they want. I get it. Like, if you saw that movie and loved it and decided hey, I’m going to start reading comic books and then you picked up something where he is damn near thirty and divorced you’d be like wha?

Okay, so after the first few pages you’re not going to believe this, but Spidey saves a car from these two burglars and he’s squatting on top of it in the alley while the owner runs up and calls him a, JUST GUESS! A MENACE. I write as I am reading and that slayed me. Oh, you don’t think that’s funny? You are wrong.

Anyways, Spider-Man is slinging through town stopping a butt-load of crimes, he’s definitely going to be late to the show he was heading towards. It’s literally crime after crime after crime so Peter decides to ask one of the goons what’s up, and it turns out every criminal in the english-speaking world (and some dutch) got anonymous tips to do their crimes all around the city…except…and thanks to Spidey’s special suit that has the internet for some reason…he realizes there are no crimes around Stark Tower.

Spider-Man finally makes it to Stark Tower and he IMMEDIATELY finds the bandit. The bad guy was legit on the same floor that Spider-Man lept into. How many floors are in that place? And how lucky are you to hop in through the exact window that faces a Stark vault? How well does this spidey-sense of his really work? And do you remember my Superior Spider-Man recap?! If you don’t, Black Widow downloaded his p owers so they could be copied and gave them to S.H.I.E.L.D.! Are you feeling the same anxiety I am feeling, yet??

Spidey battles Crime Master, as we all scratch our heads and wonder how Stark Tower could be left so heavily unguarded that one nerd wearing, in what I can only imagine is, a sock on his head, could break in followed by a guy dressed in bright red and blue pajamas and nobody bats an eyelash. Iron Man? Nowhere to be seen. Happy? Not around. The Avengers? Nope! Maybe they’re in space! Who knows!?

Peter ends up missing the show he wanted to see and already bought the ticket for, and this makes me really sad. He keeps talking about “looking at the bright side” through his disappointment as he slumps away with the most disappointed of faces and I want to burst into tears. I just want this little boy to have a normal life! Does anyone care?!

Then he saves a cat in a tree and gets insulted by a fat kid.

AND THAT’S HOW THEY ENDED THE COMIC!

Seriously. We got trolled.

Thankfully they peppered in an extra little story with an excerpted reprint of when the original Spider-Man fought the vulture in 1963.

I won’t bore you with the details, but at the end of the issue Peter sells his Vulture/Spider-Man battle photos to J.Jonah Jameson for a crap ton of money. So much money, in fact, that he pays the rent on his Aunt May’s place in Queens for an entire year.

I have decided I would like to get into the business of photography now that this information has become available to me. 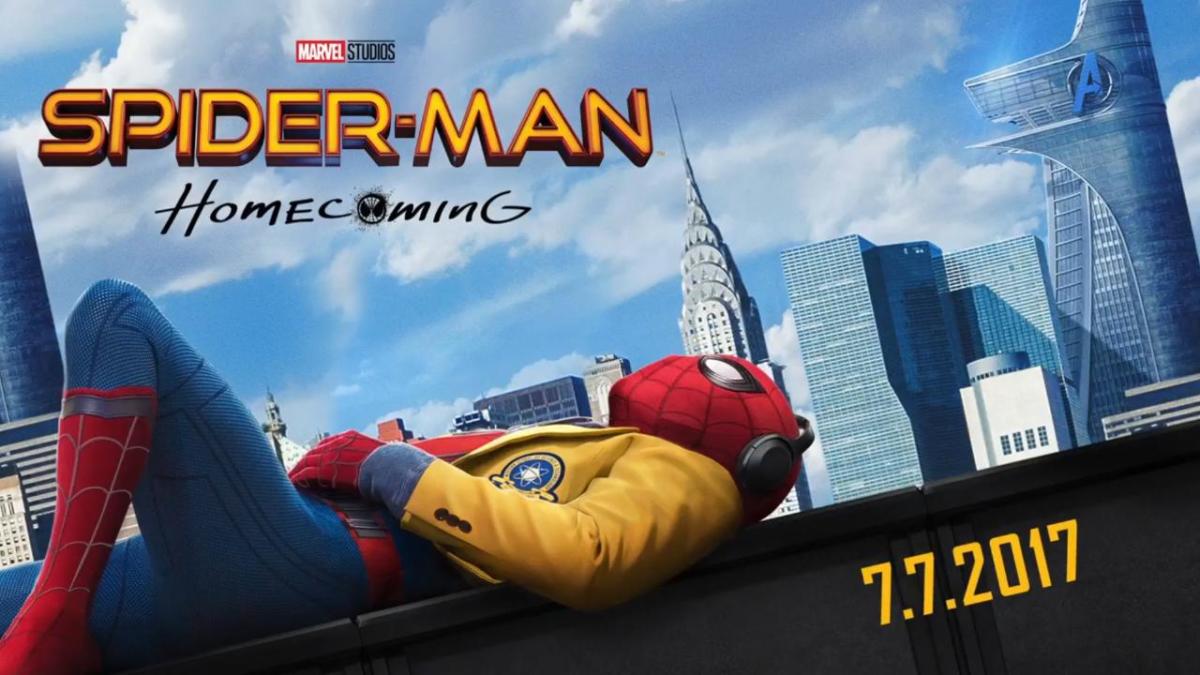 Just got back from seeing the new Spider-Man movie. I was not planning on seeing it, but somehow I was pulled in.

So a little more background on why I didn’t necessarily want to give in and see this movie is because of the civil war movie where he is introduced… See, I’m still pretty upset about the timeline, because as we all know that during the actual superhero civil war Peter Parker was a 27 year old married science teacher. Not a sophomore in high school.

Other than that I didn’t hate it. Here’s some things I loved. I loved how diverse the cast was. There were Asians and black kids and I think Flash Thompson was Indian! I loved that Donald Glover was in it for a hot second! Too bad he wasn’t cast as Spider-Man and instead was technically “The Prowler.” They really threw that “Prowler” thing in just to name drop. He really didn’t do anything Prowler-y and I don’t  think they’re saving this character for a sequel. Kind of a waste to throw that character down the toilet, IMHO.

ALSO they were calling Zendaya “Michelle” Um no, her name is Mary-Jane mother fucking Watson.

I loved that Liz Allen was black and that Peter’s best friend was umm…Filipino? I think… I’m pretty sure that character was based on Miles Morales’ best friend, so I let this slide as well. He was a great character addition, the guy in the chair. He won my heart. However, we all know Peter didn’t have any friends in high school. Zero. Real, real  big nerd. He was almost a nerd in a creepy way, too. In movies he’s portrayed as a lovable smart guy, but honestly in the original books he was a definite spaz until he went to college and got hot. Also Aunt May in the movie was hot. That’s not the aunt May we know and love. There was a lot I had to get on board with which angers my nerd heart. In this case I was into it because SOMETIMES I think movies can be a second chance for comic books where they went wrong.

These magical writers were able to tie in that Liz Allen’s dad was the Vulture the whole time. That would mean that Adrian Toomes and his wife were pretty progressive in giving their daughter the mom’s maiden name or they are messing around with a character’s real name again a la this “Michelle” BS.

This movie made the vulture cool, which I never thought would be possible. But my nerd heart was happy because the Vulture was the first major villain that Peter ever fought so it was really fitting for our high-school boy to take on this guy in his coming out movie! Okay, I really felt for the Vulture, too. He was a nice guy. I loved his super villain backstory of just being a working-class guy trying to make a living for his family who keeps getting screwed over by the man. What makes someone a bad person is all about perspective really. Like, he never meant his friend to turn into dust when he shot him with that gun, that was just an accident he took really well and nobody around him remotely cared about.

Happy and Iron Man were heavily prevalent in the film since Marvel is doing cross-over to death. They really showed how green Peter Parker really is. Like when one of Iron Man’s drones saved Peter’s life. (THANK GOD!) Or when the real Iron Man saved a Staten Island Ferry that had been cut in half by the vulture and his Chitauri weapons. Tony Stark really tries to “dad” it up in this movie and he does an amazing job because in the end Peter Parker really grows up and morphs into one entity.

All in all the movie earns an A from me. The action scenes were incredible, the villain was super powerful and intimidating, the cast was culturally so diverse, it was kind of funny and then of course… THEY THREW IN THIS LITTLE GEM

And I sort of understand the Homecoming title now.