No Hit- Girl this week.

But Since Deadpool’s premiere is just around the corner I’ve decided to recap issue #1 of Deadpool Kills Deadpool. HOORAY!

We begin in Deadpool’s dirty kitchen. There are empty pizza boxes laying around and dishes piled in the sink. He probably stinks. A masked man is making fun of Headpool for not having an intestinal track. Rude.

The man in the mask sticks Headpool into the microwave and blasts his brains away.

After the zombie Headpool explodes in the microwave, the man in the mask is revealed from the shadows and he looks a lot like Deadpool, but in an all-black costume. He really is always trying to one-up Spider-Man isn’t he?

Anyways it becomes incredibly obvious that this man in the mask is our “hero” Deadpool. Cause lyke right after this, he bodyslides by one.

After Pool bodyslides we go back to the “Real Marvel Universe” and they lose me. Just stop confusing me, Marvel.

Deadpool is battling the Ultimatum and making quips about other superheroes. My favorite was “stop hacking my Bieber and Beers Tumblr account”  –  Wolverine.

Deadpool is having a hard time taking down Ultimatum and his droids, but luckily a spaceship comes in hot toward the battle.

AND IT IS THE BEA ARTHUR! The spaceship of the Deadpool Corps. AKA Alternate versions of Deadpool in different universes. NORMAL.

There’s two extra dolts on the Deadpool “CRUE.” A golden age gas mask hero and a pulp version of hisself.

The reason the CRUE is there is simple, get Deadpool onto the ship. But they don’t give him a reason just that he’s “in danger”

So Wade is lyke, um no? I need to wait for the Avengers to clean up this mess I made.

Kidpool tells Deadpool to stop trying to hard because the Avengers and the X-Men will never like him. As they hurry onto the ship, Gasmask Deadpool says “pip-pip now cheerio, we must get on to thee ship now and drive it with duct tape. But we never get to understand why he says these things because then the black mask Deadpool murders the Gasmask Deadpool. Which is wonderful because I don’t like him.

So Deadpool is like wtf? And then a battle ensues.

Deadpool knock him on his ass and is ready to give him his death-blow when black mask man bodyslides outta thurr.

Only to have bodyslid right behind Deadpool and puts a chainsaw through him.

It looks like our hero is about to be murdered by our other hero. Luckily Dogpool nips in to save the day.

To only then be immediately obliterated.

oh, maybe I should throw this in here. 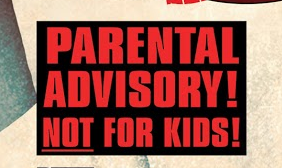 As Kidpool mourns the loss of his beloved pup, Deadpool wastes no time in outsmarting this black mask Deadpool.

BMD: We have nothing in common!

DP: Except the same voice. Bodyslide by half.

Deadpool picks up the blaster gun that the black mask Deadpool was using to obliterate the other Deadpools and blasts him away.

Just kidding. As it turns out there are more Anti-Deadpools according to Lady Deadpool. He was only the beginning.

The Watcher saw this war in advance and warned the other Pools about it.

Then the Watcher calls him the Progenitor.

Which I guess is like the parent of all things.

What in the world???

What do you guys think of this series? Should I keep going???

Let me know in the comments below!