This is what it feels like when doves cry. 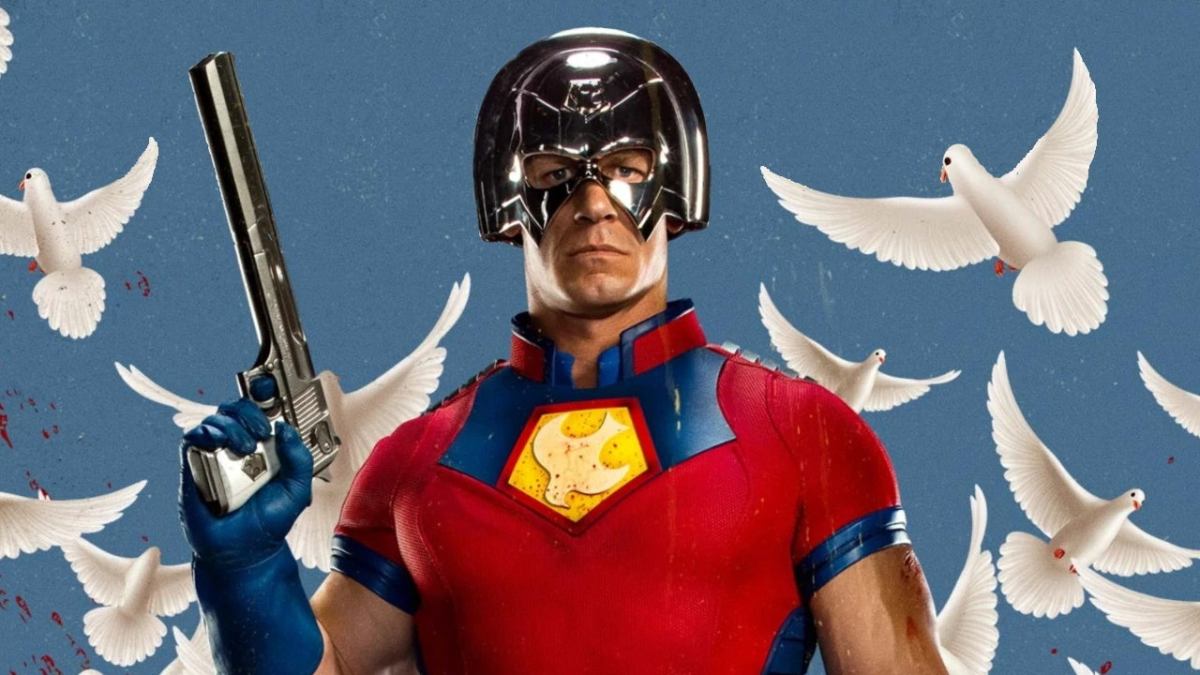 Hello, and welcome back to another special episode of Comic Book Bitch.

Today we will be deep-diving into the premiere episode of the new Peacemaker series on HboMax.

And by deep-dive, I mean I am going to explain deeply shallow thoughts about the series with which I have no business discussing.

The series takes place pretty much immediately, or as much time as it takes a clavicle to be replaced in the human body, after Suicide Squad 2.

For my thoughts on Suicide Squad 2, listen to my podcast, Relatable With Ilsa and Kyra.

If you don’t want to listen to the podcast then here’s my thoughts: I fucking loved it. Except I hated Peacemaker, but in a love to hate way.

And I continue on my love to hate way about him on this series since he comes off as a lovable oaf despite him killing my best friend, Rick Flag.

SO! Peacemaker/ Chris has had his clavicle replaced, then he’s released and he’s like ummm, am I going back to prison? And he has no friends, so he asks this hospital janitor that he smoked pot with once if there’s cops out there. And there conversation goes like this.

Janitor: No, there’s no cops. Why?

Chris: Cause I was in prison for killing people.

Chris: Cause I’m a superhero

Janitor: You have the wrong body type to be a superhero. And your face is at most 5/10.

Janitor: Aquaman is a superhero. And he’s gorgeous af. Have you seen that bod? That hair? That face? Yummm. Am I drooling? I think I’m drooling? Did you hear that Jason Momoa is single?

Janitor: No he doesn’t.

Chris: He gives the guy who works at the aquarium $50 every week and goes in the fish tanks and has his way with all the little fishies.

Janitor: Wow, I just got the name of that site.

So no one, including any police, are there to take him so he goes back to his home, a nasty trailer, and he realizes his phone is still working which means he has been paying his cell phone bill from prison for four years, which means he ain’t got no money. Then these nerds from Suicide Squad 2 show up and are like, “hey you have to work with us or we will blow up your head.” So Chris is like, okay. Then he goes to his dad’s house to complain about his phone bill. His dad don’t give af, all he cares about is white supremacy.

Oh somewhere during this time we are introduced to Tastee from Orange is the New Black, she is married to a woman whose vagina we see in later episodes, and they are mothers to three small doggos who like to wear fancy sweaters.

AND she is Amanda Waller’s daughter. Which is like, oh wow Amanda Waller can’t be that bad, she is a mother and her daughter is awesome. But then you’re like ohhhh wait she is like super demented using Deadshot and Bloodsport’s daughters as collateral for getting them to work fer her. lmao.

K, so Chris gets a new helmet from his daddy, and his pet Eagly back and Eagly hugs him which is cute. Then he meets up with the nerds at a diner, and he calls a waitress sweet cheeks referring to her facial cheeks, but we all know that’s not what it means.

God this recap is so long. Okay so then Peacemaker follows the hot blonde nerd to a bar and tries to fuck her, she tells him off, but also says that he is handsome. And it’s like, no he fucking isn’t. Like yeah, he is tall and muscular, but that face. That is not a hot face. He has 2/3 I’ll give him that. And 2/4 if you count personality, but he ain’t hot. Like you need at least a 3/4 to be hot. Some might argue with me that personality doesn’t matter when it comes to hotness, but as a straight woman I can tell you that with the filth I deal with on a daily basis a nice personality really does come in handy. But I digress.

Anyways, blonde nerd leaves and Peacemaker finds some white trash to bone, and that’s great for him. He’s been in prison for four years. He can live a little. Unfortunately, after they fuck over the sink, she turns crazy and attacks him with a knife and beats the shit out of him really bad, so much so that he has to hurl himself out of a window at five stories in the air, which is not good for his recently replaced clavicle.

He manages to crawl to his car and sends Eagly up in the air as he scrounges around for his brand new spanking helmet that his white trash daddy made for him. Meanwhile, the white trash girl has jumped out of the fifth floor window with ease and does a superhero pose for good measure.

ANYWAYS, White trash girl finds Peacemaker but he puts his little helmet on and sends out a sonic blast just in time to explode the bitch.

And that was the episode. No need to watch it if you haven’t seen it already because I did really good job recapping it.