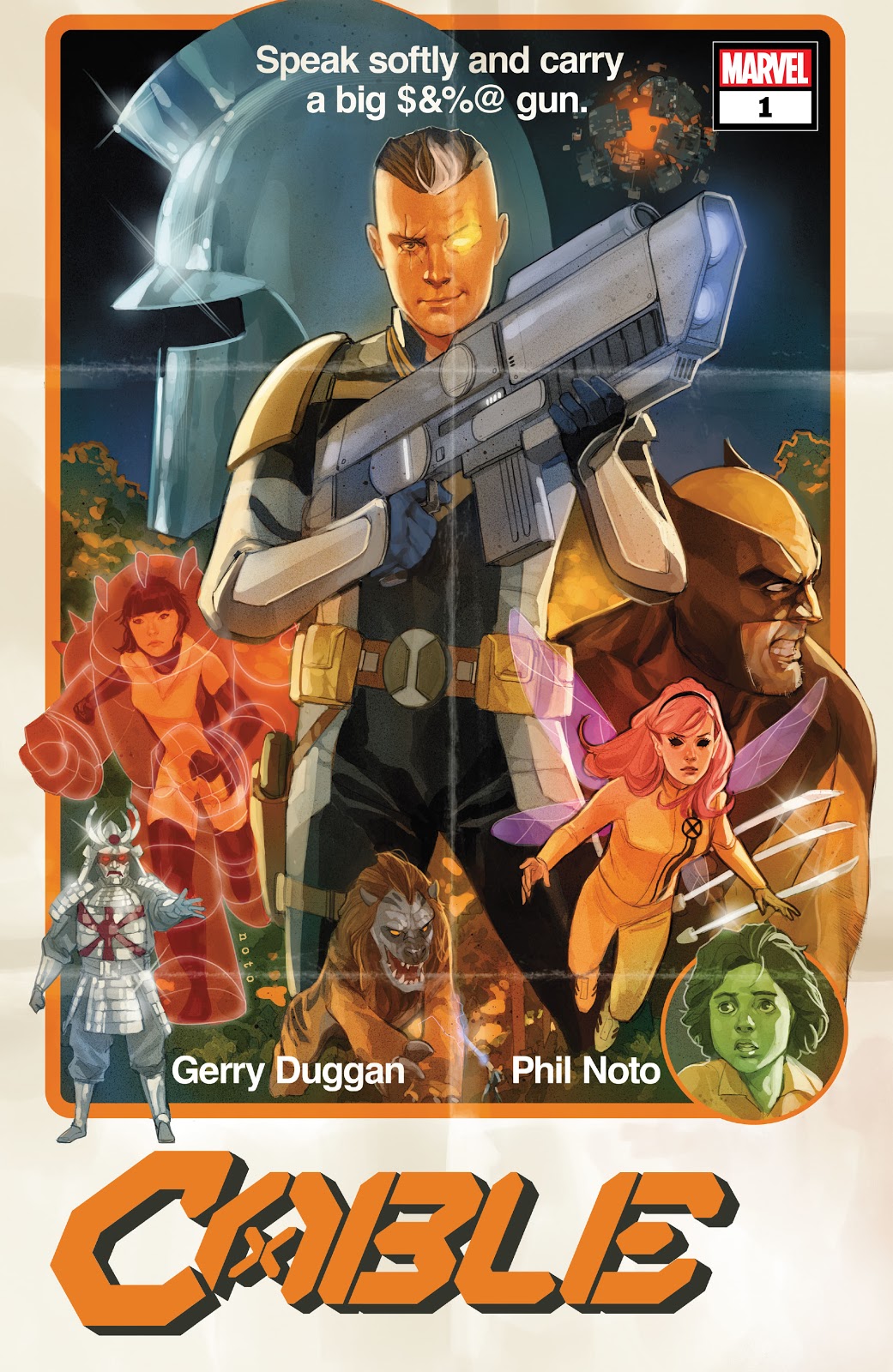 My first thought upon seeing this comic book was that Cable looks mad fucking weird. Like when has he ever had a baby-face. Then I realized that this comic book, created by Gerry Duggan and Phil Noto, is about baby Cable.

Baby Cable is living on the mutant island of Krakoa and he fights other mutants for fun. These matches are refereed by the Silver Samurai.

The comic starts with him fighting his “Uncle Logan” in one of these mutant fight matches and for some unknown reason Kris Jenner is there cheering him on.

Cable is getting ready to celebrate with his gal pals, Armor and Pixie, when a little boy named Curse asks Cable to go save his friend, Fauna. Fauna is a little bitch who decided to cross the border of Krakoa and go into the side of the island that is filled with monsters. Why these mutants decided they should live on an island filled with monsters is not my fucking business, but they explain it anyone. The reason is that Krakoa ATE another island. Sure, we’ll go with that. I’m fine, are you guys fine? Islands eat islands. New Normal.

Within like one page Cable finds Curse’s friend Fuana, because the meat of this story must be here and not the missing kid. Pixie is like “you found him? Coolio I’m going to meet up with you, but also there’s a giant Lion Monster following me so watch out when I get there!

Cable gets ready to fight this lion and starts throwing grenades at it, meanwhile Pixie decides to drug the little kid, Fauna with her magical “pixie dust” or “Molly” as it’s known here on Earth.

Fauna says that the Lion is hurt and needs help, but Cable is like “you’re high, get out of here.” So Pixie flies him off while Armor runs in and tackles Cable and straddles him then begins talking about her feelings.

Despite Armor trying to distract Cable by any means necessary, he sees a piece of giant metal sticking out of the giant lion paw. He’s like we’ll pull it out and heal it and then the Lion will be our friend. Armor is like “okay, how do we get the lion to stand up and show us his paw?” That’s when Cable takes out a giant gun and shoots it into the Lion’s face. Yeah, kinda the opposite thing that ya’ll were going for, but that gun exploding in its face is what gets the Lion to fall down on it’s side and it is stunned long enough that Cable takes the metal out and heals the paw. 2 stones, 1 bird.

The metal piece turns out to be a magic sword, oooo.

The lion runs off because he’s like “They shoot me and then heal me? This clearly a toxic environment. I don’t want to be gas-lighted into thinking that because they say they’re sorry, it makes it okay that they shoot me in the face. I am a strong Independent Lion and I will be respected as such.”

This sword sends Cable on a mushroom trip and he remembers all the battles the former owner fought. Then he passes out. His friends gather around him and Fauna is like, “did I get Cable killed?” And Armor is like, “It’s fine, we’ll make up a different story.”

WHAT THE FUCK. She was just straddling him and trying to bone him under a lion’s paw and now she could care less if he died right now.

Spoiler Alert, as if all of my recaps aren’t total and complete spoilers, Cable stirs awake and he’s like, “I have a new sword, yay!”

Cable shows it to his dad, Scott Summers AKA Cyclops, and Cyclops is like “you’re naughty going to Monster Island.” and Cable is like “But I have this sword. I wonder where it’s from?” Then Cyclops is like “Well, let’s let the writers create a whole new world in the next few panels.”

The sword is from space New York and these rude titan soldiers want it. SO! They’re going to go after Cable. Obviously.

There’s a few more pages. On a completely different planet or island or time idk which, Old Man Cable is shooting crabs with a large gun.

WHAT DID YOU THINK OF CABLE #1?

I thought it was pretty good. Great set up, great characters, violence, heroism, romance. This one’s got it all.