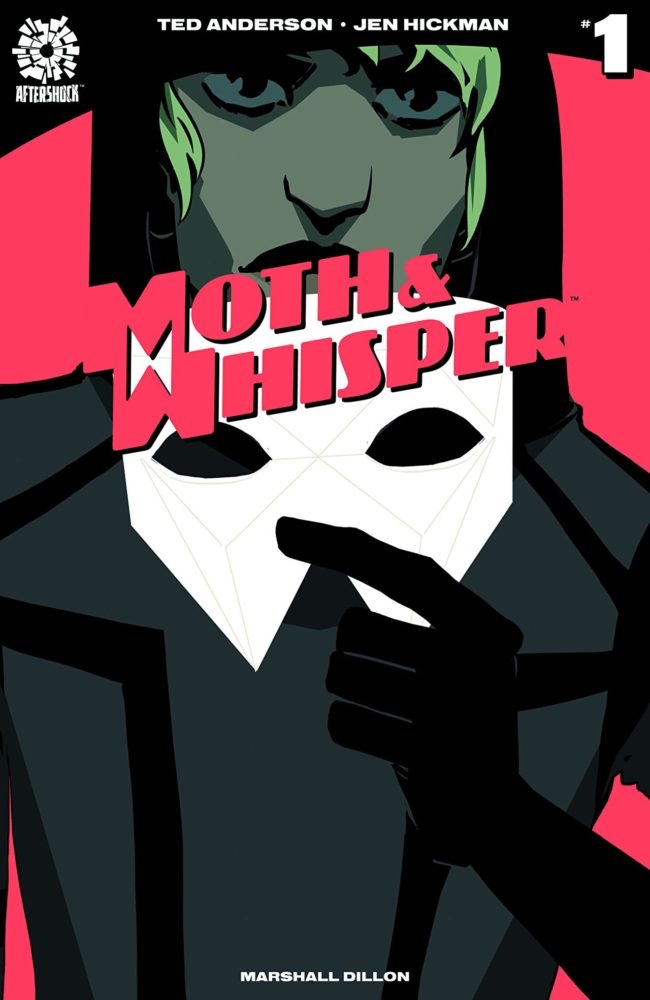 This is gonna be a fun one, guys.

I know this one has been out for a few months. The current issue out right now is #3, but I only recap #1 comic books so…yeah, I’m gonna do that.

Moth & Whisper by one of my new favorites, Aftershock comics, is about two thieves. It was written by Ted Anderson with art done by Jen Hickman, I should also mention they were co-creators/collaborators. So yeah.

It goes on to explain that Moth is a chick who can change faces and steal people’s things by bumping into them and then turning into a new person so you can’t find her. She leaves behind a calling card which is of a Moth.

Whisper works just as well and in a similar manner except no one has ever seen his face. True or fake, they literally don’t even know he was there. Sometimes the only way you knew who you were robbed by because he would leave behind a calling card of a skull with a hand over his mouth. He also exposed government secrets so that was his thing apparently.

After we get introduced to these thieves we move to a new set of what seems like the bad guys. They’re insulting each other and talking about owning the black market on firearms. So yeah definitely bad guys. And most likely European. Because who needs a black market when anyone get a gun in America? No matter your criminal background, psychological background, or what have you, you can just get a gun. A machine gun even! If you can afford military grade weapons then by George you can get one!!

Back to Moth & Whisper. These thieves had no ties and they would steal from anyone who paid them. They had even been told to steal from each other. However no one had heard of them or seen a calling card from them in 6 months and people believed that they were gone and there was no one who could ever replace them.

In the next scene we see a woman behind a man and she is talking to him. She has just slipped some important files into his pocket. He is like “thanks, so you’re moth? You don’t look how I thought you would.” And she’s like “yeah.” Then he goes, “well let me get you the rest of your payment…” And she’s like “already got it, peace out.” And he’s like “wait up did you read what is on these files.” And she’s like “Um, no. It’s not my business.” Then she ducks out and changes outfits/faces/hair/everything. She emerges as the Whisper.

The Whisper has been hired by a seedy looking bunch. And the main guy is like “where’s my shit?” Whisper hands it over and the guy is like “Weird you took this job since last time you got into a firefight (whatever that is) with half my guys.” Whisper is like fuck. The main guy goes on to say that Whisper sold the details of his convoy to this guy’s rivals. Whisper is like hmm double fuck, “How do you know I was the leak?” The main guy is like “shut up, you’re caught. Then there is this bright white light and a bunch of smoke and the henchmen all scramble around to find the Whisper. However, Ol’ Whispy took a dude hostage and is about to get away.

The Whisper shoots some people and runs the heck out of there. Once outside he calls on his suit to make an emergency change as he runs out into the streets.

The henchmen run out after the Whisper and find nothing. She already turned and jumped onto the subway. BYE FELICIA! DON’T WAIT UP!

Anyways this girl who is both the Moth & Whisper is on the subway thinking to herself about how badly she fucked up. She’s like “I should’ve known Haag was after Whisper. I gave away the drive without getting payment first, I’m a fucking idiot.” I’ll say.

She heads back to a safe house that is creepy AF.

Once inside, she tells the suit to remove itself from her body and put her back to normal. And as she removes her mask, she wonders how her mom and dad did all this thievin so good!

As legend would have it the Moth & Whisper are enemies but its not true. They were partners/lovers and they ended up having a child with blonde hair which makes absolutely no sense because Moth is black and Whisper is a white person with black hair. Look at the kid.

Now look at the parents

WHY IS THE CHILD BLONDE?!

Anyways as Niki eats her fucking Top Ramen she replays an old video that her parents left her in that old “In case we go missing please watch” bags.

Basically in the video Niki’s parents tell her to stay in the safe house and not to go looking for them and that they will be back at some point. As it seems at this point they’ve been gone for six months. Shit is crazy. And now Niki is dawning Moth’s costume and doing some crazy ass shit for no reason. I guess if the kid isn’t in school she needs a hobby so whatever, I will not fault her this time.

Her parents left behind all these files on bad guys as well as a suit that allows Niki to go out and be whoever she wants, as well as a shit ton of weapons and some money, so apparently they want her to be them? IDK it seems like bad parenting but also there would be no book if the kid was just like “wow I have super spies for parents, okay night night.” END OF SERIES.

So Niki decides since she has all this crap and nothing but time she might as well find out who adult-napped her parents. Niki believes that the only person who has enough resources and hate against both spies is a man named Ambrose Wolfe so that is her target.

He seems like a charming enough guy but Niki isn’t into him. She says her parents would never work for the guy because he was so awful. Ya know human trafficking and stealing organs is kinda weird. But anyways we leave on this powerful note.

V Cool. V exciting. I wonder if her parents are going to come back or if they’re dead? I will be very disappointed if they are dead just because I would like to read a comic book about them. Maybe they will come out with a prequel and that would be very fun for me.

Anyways what did y’all think of this here comic book? YAY OR NAY? Let me know in the comments section!