Do you guys love how clever I am with post titles??

Do you also love how I say “You guys” even though there’s only like one person reading this?!

In time. Yes, time. You guys will see.

I love Cable because he is best friends with my best friend, Deadpool.

So the time-displaced war hero and son of Cyclop’s and Jean Grey’s (clone?)  has traveled back in time to the 1800s in Arizona. Thank God he’s white! AMIRIGHT!?

From what I have learned from these first few pages is that a bunch of cliche robbers are sitting around a poker table in and old-timey saloon, as they were called in those days, and it’s a little weird because there’s a few dead bodies laying around them and everyone else who is alive is in a panic.

I think they need a hero.

And huzzah he has arrived! 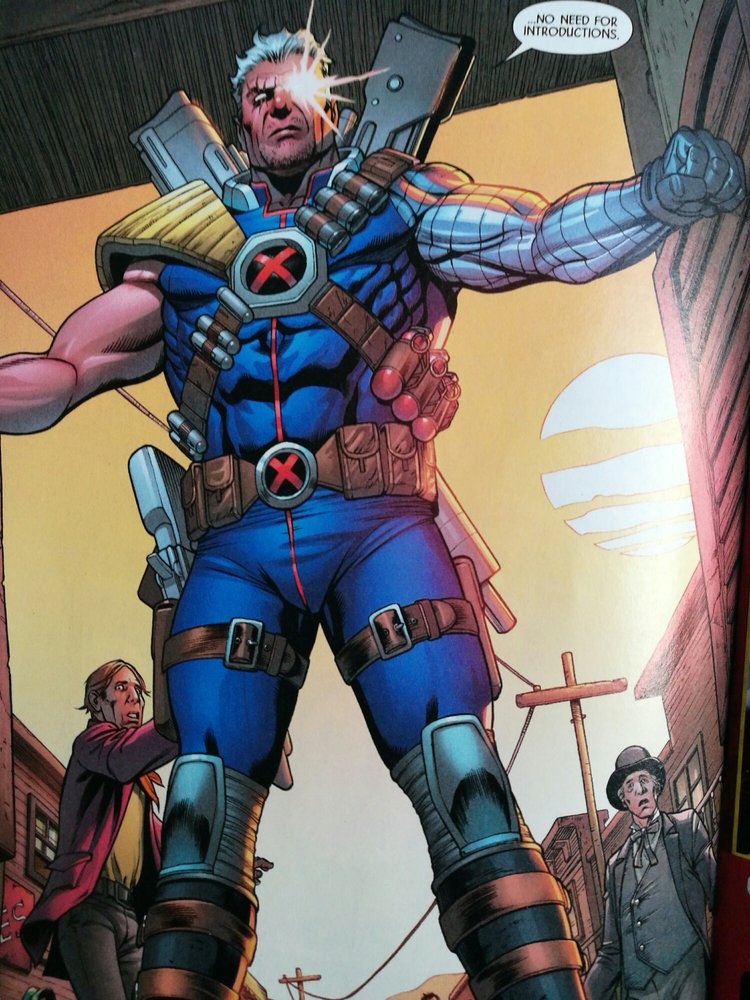 Now, things get interesting. SO INTERESTING IN FACT, that these 1800s robbers/murderers have future laser guns!

HOW DID THEY GET THEM!?

I think we’re about to find out.

Well not this issue but perhaps next…

Cable beats these guys up and asks them questions about the guy who gave them the guns.

And apparently this guy can transport through time. At least it sounds that way since the guy he questioned said that he “vanished back inta thin air again.”

BODYSLIDE BY TWO ANYONE!!? I will literally die if Cable is hunting Deadpool RN.

So Cable disappears in the same crop field the other guy disappeared into which for some reason transports him into Japan in 1543… IDK! I have so many questions…let’s read on.

Also this is great because it’s filled with so many determined Cable faces.

He meets a random Japanese woman, the only survivor (plus her infant son) of a deathly battle as he watches her village burn down. He promises to avenge her son and not her, which, I mean, is a little sexist.

He continues on his journey to find a group of Japanese warriors. He was clearly looking for them, I’m assuming these guys were the ones who burnt down the village.

I think my Deadpool theory is concluded, they would have definitely thrown him in the ending of the first issue if he was behind it, because that would like , triple the sales.

Cable usually has some more interesting friends to carry his story lines so it’s a risk to give him his own solo book. If you’re a big Cable fan you probably hate me for saying that, but my favorite characters are the funny ones or the dramatic ones. Cable is the type of guy you should marry. He’s stable and secure and knows what he wants, but girls still fuck around with the Clint Barton’s of the world. I think I need a second opinion to sell me on him before I go pick up #2.

Still love you Cable, mean it.